For many years I have been intrigued by the Fullerphone. Over the last 30 years I have gathered information of its history, operation and practical use. On this and next web pages I compiled some basic historical and technical information about this nowadays relatively unknown, but very remarkable DC Morse telegraph.

The Fullerphones Mk.IV and Mk.IV* were the most widespread models. 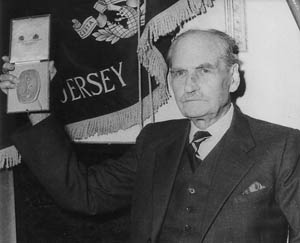 By Sigmn R. MELLOR, published in 'Jimmy', the WW2 journal of the Royal Corps of Signals in the Middle East.

What is my greatest joy in life,

More precious even than my wife,

So comforting 'midst all this strife?

How well I love your merry tricks;

Even when your buzzer sticks;

Delighting me with faint key clicks;

How tunefully your buzzer throbs

As tenderly I turn those knobs.

Most fascinating of all jobs.

I'm not sure what to do with you.

Yet even you add beauty to

Oh how I pity those poor souls

They never hear the tuneful tones

Of perfect Morse within their 'phones:

But I must cease to write more verse.

No wonder that I rave and curse

How can one live a life of ease, 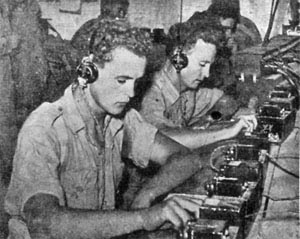 Tobruk-1942... A row of Mk.IV Fullerphones in use at an Australian headquarters in the Western Desert.

The Fullerphone (Pt 1-4). Its Action, Uses and possible Future Uses.

The drop of potential method for fault location - application of Fullerphone. Published in The Telecommunication Journal of Australia, Oct. 1947.

The Fullerphone, and its practical application to military and civil telegraphy. 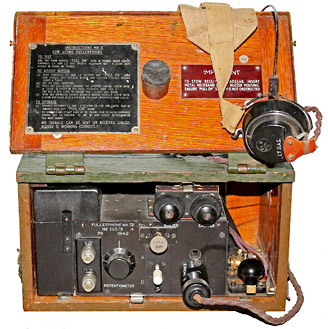 World War One.. two large armies were densely packed in their trenches, at places only a few hundred yards apart. Signal communication was principally by telephone and various buzzer telegraph instruments, connected via single line and earth return. The earth was thus alive with buzzer and telephone induction.

During mid-1915 the Germans were extraordinary well informed of Allied plans. Carefully planned raids were met by hostile fire exactly timed and directed. Relieving troops would be greeted, if not by shells, by shouts of welcome from the opposing trench.

On one occasion a Scottish battalion took over its new front to the strains of its regimental march played by a German cornet! Espionage was suspected but an interned British civilian brought back the information that induction of lines led to widespread overhearing of signals.

Hastily conducted experiments carried out within the Allied lines left no doubt about the cause of the leakage, and measures against eavesdropping were rapidly introduced by using metallic circuits (twisted pair of wires instead of an earth return) within 3 miles from the front line.

The ultimate solution to this problem came toward the end of 1915 when Captain A.C. Fuller devised the Fullerphone. In October 1915 Fuller brought two prototypes to 5 Corps in Flanders. His invention was tested on a five mile loop of cable, part of which ran in the water-filled moat of Ypres, with a 10 Ohm leak to earth. The instruments worked well and were obvious the answer to the problem of overhearing which had brought the British Expeditionary Force signal system almost to a standstill.  Source: R.E. Priestley, MC, BA, ‘The Signal Service in the European War of 1914 to 1918 (France)’

Initial issues of Fullerphones were made up from converted field telephone sets. This type, however, appeared to be not the most successful. Towards the end of 1916, the Fullerphone was firmly established, and by 1918 most divisions had adopted Fullerphones for all their forward communication circuits. After the Armistice, more improvements and modifications of the instrument were carried out. The basic principle, however, was never changed. In about 1937 a fully re-designed model, the Mk. IV, went into service. This (and its later variations) can be considered as the most successful model, not only being more sensitive than its predecessors, it had also a simplified replaceable buzzer-chopper, and was easy to use as it carried no telephone set. Although the Fullerphone was devised as a non-interceptable signalling set for static warfare, it was again widely used during World War 2 because of its capability to work simultaneously with a telephone over the same line and working through very long or leaky lines where telephone or telegraph traffic was impossible. In the South West Pacific, for example, the Australians made extensive use of the Fullerphone, notably in New Guinea.

A photograph of Capt. A.C. Fuller taken in World War 1.

Fuller did never received a direct financial compensation for his invention.