To the Finnish Eljot page 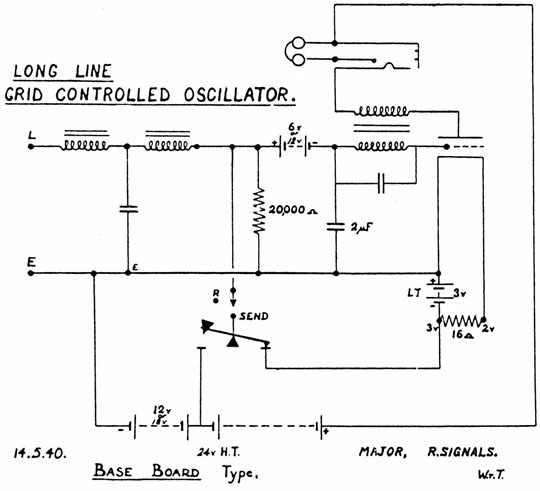 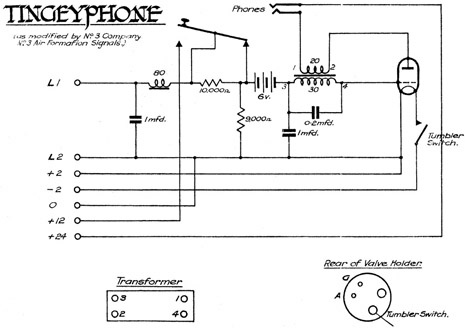 Circuit diagram of the ‘long line grid controlled oscillator’, later known as  ‘Tingeyphone’, developed in 1940. This was probably the first Base Board type and principally developed for use in a Telegraph Office. The valve was most certainly a type 30, as this type was mentioned in a different and later drawn circuit diagram. 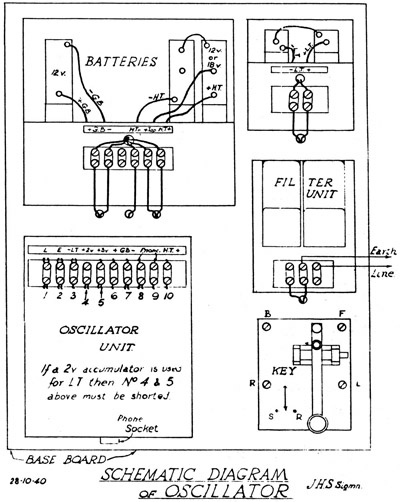 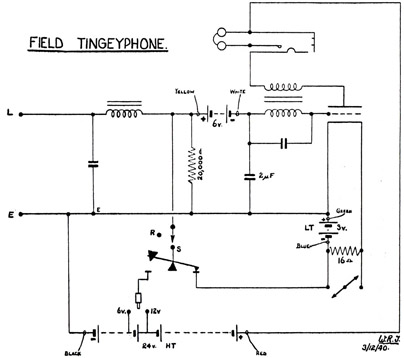 Circuit diagram of a modified Tingeyphone used by No. 3 Company, No. 2 Air Formation Signals.

The Tingeyphone was developed by Robert Tingey, a Territorial Army officer working for Plessy before posted to Egypt Command Signals in 1940. He was given an administrative job which was a waste of his undoubted talent. He was called back to the UK at the end of 1940. Whilst in Egypt he devised an instrument based on the standard Fullerphone, but with the interruptor (‘buzzer-chopper’) circuit replaced by an AF valve oscillator normally biased negatively to prevent oscillation. By pressing the Morse key, at either station, a positive voltage was applied to the grid and the valve oscillated. When the key was at rest, an applied negative voltage overcame the capacity of the line, stopping oscillation sharply (hence no blurring as with the Sutel 40). The same disadvantages as with the Sutel applied: high battery drain (which was not such a problem with the telegraph office based ‘Base Board’ Tingeyphone) and the line connections could not be interchanged. The latter was unlikely as generally a single line with earth return was used.

Compared with the design of the German Sutel 40, the latter was technically and mechanically very superior, but the working speed of the Tingeyphone was much higher, with working distances over 800kM achieved in the desert.

Major D.A. Macdonell, (‘Mac’) who served with Major Tingey in Egypt and actually worked with Tingeyphones wrote in 1987: ‘…the instrument was a very fine piece of work and proved useful in the Desert. Using headphones it was a pleasure to use and a great change after listening to the ‘click-click’ of a sounder. It was a marvel how it worked over bad lines and worked well over an earth return. The note could be varied to suit the listener..’

*) When I met ‘Mac’ in the late 1980s he was busy preparing a replica of the ‘Base Board’ Tingeyphone for the Royal Signals Museum in Blandford. ‘Mac’ described W.R.Tingey as: ‘..a real gentleman, quiet and of good disposition, it was a pleasure to be with him..’ 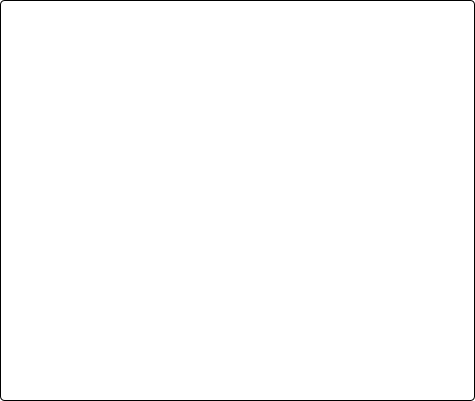 The circuit diagram of the Field Tingeyphone (above) differed only in detail to the Base Board model. The constructional arrangements were probably different.