To the German Sutel page

The most awkward part of the Fullerphone and liable to give difficulties was the mechanical Buzzer ‘F’, also known as Buzzer-Chopper and Interruptor. Not only its relative instability and requirement for periodical readjustment, it was also difficult to adjust under field conditions. It was for these reasons that investigations were made towards a more reliable substitute. Although these alternative solutions worked generally stable and satisfactory, the main disadvantage was a considerable higher battery consumption. The Fullerphone with mechanical buzzer-chopper remained therefore in general use.

Apart from the Tingeyphone, the German Sutel (both used operationally in World War 2) and the Canadian ‘Buzzer, Electronic’, other electronic Fullerphones were developed in World War 2. It is unlikely whether these ever came into production, but their designs are certainly of historical interest. 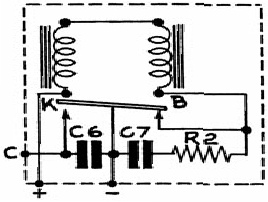 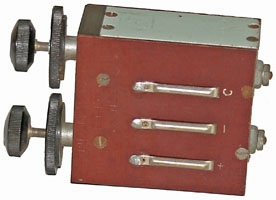 The Buzzer ‘F’ Mk.II* was a polarised buzzer operating from a 1.5V dry battery (X cell) and used one pair of contacts for driving (B), and a second pair (K) for interrupting or chopping the DC pulses at approximately 550 times per second. The three external connections were brought out on contact strips on the back of the buzzer. Radio interference suppression was accomplished by C6, C7 and R2.