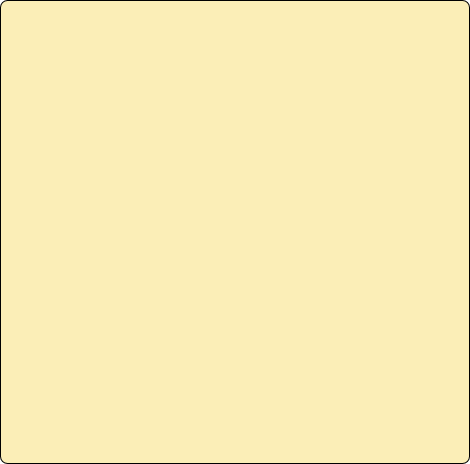 The Utel ([U]nabhorbare [TEL]egraph, translated non-overhearable telegraph) was a German equivalent of the British trench-Fullerphone. It is not known whether the Utel was copied from a captured Fullerphone, or the instruments were independently developed at the same time (as described in a 1934 issue of ‘F-Flagge’). The principle of operation of the Utel mod. 1917 was similar to the British Fullerphone. There is little doubt that the sets would have been inter-operational.

The Utel mod. 1917 was manufactured by Siemens und Halske, housed in a strong oak case. The folding Morse key was fitted on the front panel and could be operated with the lid fully closed. The batteries, Summer (Buzzer-chopper) and calling relay were located in separate compartments, easily accessible through small removable covers after the lid of the instrument was opened. The dimensions of the Utel were 7¾”x13⅜”x6¼”, almost the same as the Fullerphone.

The Utel was powered by two 1.5V dry cells. There was no potentiometer or reverse current switch for balancing out certain forms of DC earth potentials which might be picked up by the line circuit, notably on those where the earth was used as return line.

All photographs on this page are courtesy Kevin Connelly who brought his Utel to my attention and kindly allowed publication of his pictures.

Circuit diagram of the Utel mod. 1917 which was attached inside the lid of the instrument (left). The principal filter and buzzer/chopper circuit is highlighted on the circuit at the right hand side. Click to enlarge. 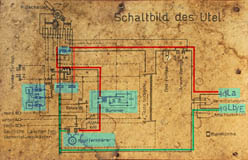 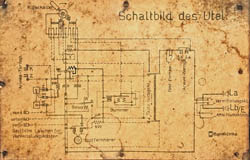 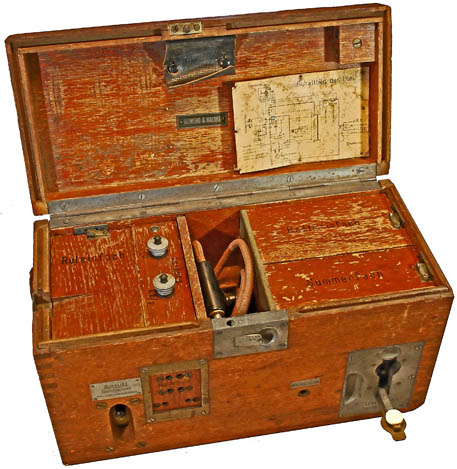