This French Army Fullerphone known as ‘Appareil de télégraphie secrète’ was developed in World War 1 after one the British Fullerphone designs. It had a telephone embodied. When preparing this page no other information was found as in a German World War 2 datasheet ‘Kennblätter fremden Geräts, Heft 13, Nachrichtengerät’. (Foreign Equipment Data Sheets, Volume 13, Signal Equipment. See also WftW Compendium 3).

I am still looking for a larger original photo, including further information. 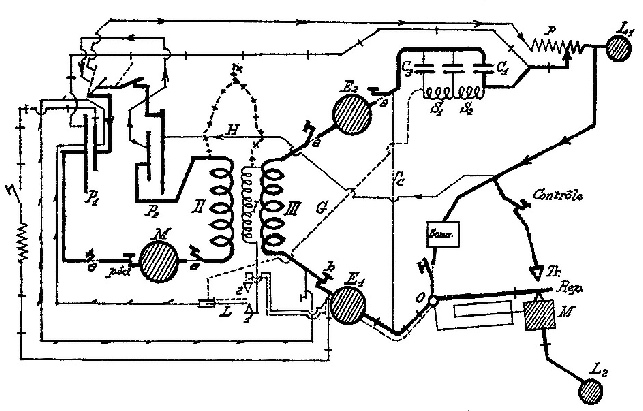 Circuit diagram of a French variation of the Fullerphone. This model had a built-in telephone with an inductor calling device M. The buzzer/chopper was L with coil I; contact 2 was connected to single headphone E1. Two batteries P1 and P2 were required. A potentiometer P was provided for balancing out certain forms of DC earth potentials.

Download the instruction sheet of the French WW1 variation of the  Fullerphone. With thanks of Guy Millot of the French Museum of Communications in Champagne (France).