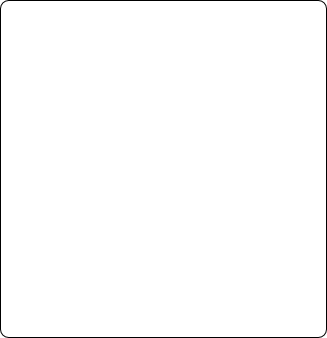 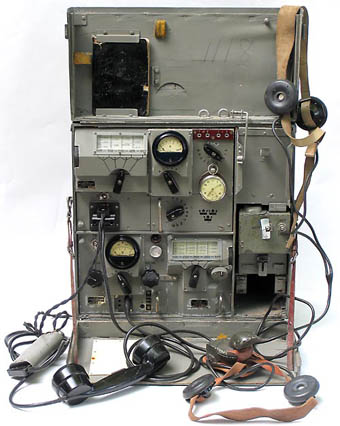 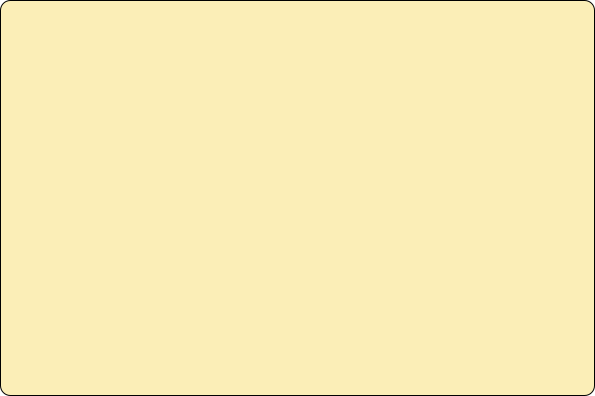 Front panel and chassis top view of the transmitter unit of the Swedish 10 W Br m/39. (Click to enlarge)

In about 1936 the development started for a new portable transmitter-receiver for the Swedish Army by Ellab, the Swedish Army radio development laboratory. The design was based on a new series of valves (Philips KL4/KK2/AL1 and EK2/EL2/EL3/EL5), the latest circuit features combined with a high degree of electrical and mechanical stability. The latter was achieved by separate cast magnesium chassis, a large calibrated film scale and precision milled variable capacitors. The first 10 W Br m/39 (Br=Bärbar which means portable) sets became available in 1937 and were subject to extensive trials. 15 sets were sent to Finland for trials and training which resulted in an order for 200 units, to be delivered in 1939. Full production of the 10W Br m/39 and later versions 25W Bl and 25W Sv started in about 1939/40. The 10 W Br m/39 was not intended to be operated on the move, and used a wire aerial with counterpoise.

It should be noted that the technical specifications of the 10 W Br m/39 were far ahead of contemporary Army sets. The transmitter produced about 5-7 W RF output over the frequency range of 2.5-5MHz in four ranges, anode screen modulated by a push-pull modulator. The receiver was a superheterodyne covering 1.3-6.1MHz in four ranges with BFO, crystal calibrator and rotary turret for band switching. The gain control was not a carbon potentiometer but a multi-contact switch. Remote control was provided. Power for the receiver was obtained from a dry HT battery and a 4.8V NiFe accumulator. The transmitter was powered by a foldable handgenerator unit, when packed carried as backpack along with the station accessories. 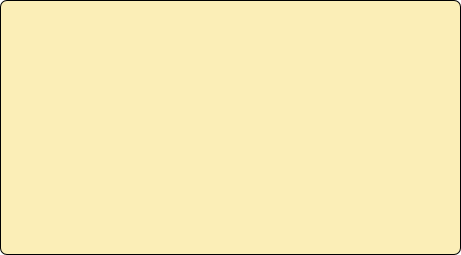 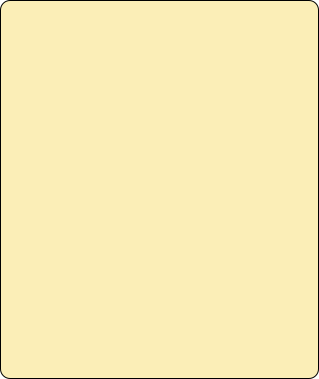 The 10 W Br m/39 was built in a strong but relative light plywood case, with dural cladding (left). It was carried as a one man load (about 25.3Kg), the second load comprising the hand generator and station accessories, weighing about 18.7Kg. (right)

A variation of the station was the 10 W Cl m/39-43 for transport on bicycles as shown above. Other variations included an animal pack station.

The size and heavy weight of the 10 W Br m/39 appeared for many applications unsuitable, particularly for Infantry use. This led to the redesigned model 10 W IBr m/39 where the station was repacked into four loads. Variations of this model for other means of transport were the 10W Cl m/39-43 (Cl=Cykel meaning bicycle) and 10 W Kl m/39-43 (Kl=Klövje meaning (horse) pack, differing only in very minor detail.

The four load station was later renamed and better known as 10 W Br/4 m/39-43. Apart from the more convenient method of transport, minor improvements were the inclusion of a junction box which allowed the receiver to be operated from the transmitter HT generator (in case no HT batteries were available), a separate rod aerial for the receiver if reception on the move was required, and a new version Morse key. 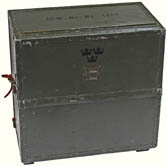 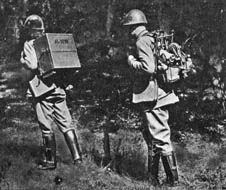 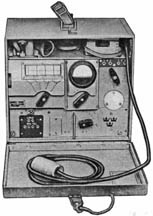 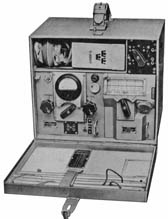 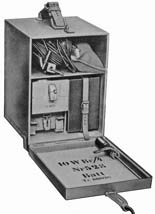 Mottagare Mt m/36-43 was a portable receiver, suitable for reception of messages on the move, or at a halt. (Mt=Mottagare which means receiver).

It was principally the receiver unit of the 10W Br/4 m/39-43, slightly modified and built into a very different carrying case. A sectional rod aerial with a maximum length of 1.33M was connected to the receiver via an externally fitted aerial matching coil. A 4.8V NiFe accumulator and HT battery were carried in the battery box along with station accessories.

It should be noted that the receiver unit of the 10W Br/4 m/39-43 (as shown above) was also suitable of receiving whilst on the move, and functionally similar to the Mt m/36-43. This feature was probably only applicable to the animal pack station. 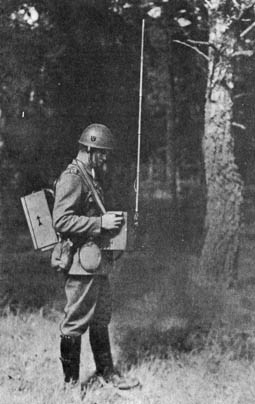 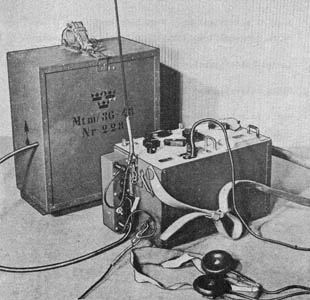 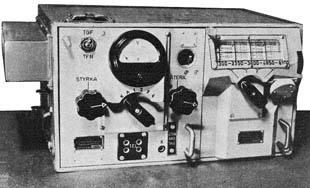 Portable receiver Mt m/36-43 used in the field carried by one man as a two unit load.