In these days of elaborate ‘black boxes’, it is difficult to imagine the pleasure that was experienced in the 1920s and ‘30s by those who probed the mysteries of wireless.

At least half of the pleasure was in the building of one’s own set, and the joy and excitement of hearing it work.

One young gentleman of those times, Arthur Bacchus, when still a

teenager, was not only an ardent experimenter but actually built up a small business in the sale of kits principally to cater for the short-wave listener.

In 1935 he founded the HAC firm with an address in Bond Street, London. In response to the inevitable question, the letters HAC stood for ‘Hear All Continents’!

This was no idle boast, and some of these sets, sold in kit form, are still in use today.

It is indeed a pity that the rising cost of good-class components, together with ever-increasing competition, led to the firm’s demise in 1983.

An early kit was the ‘DX’ model, which consisted of a ready-drilled aluminium chassis, an AR8 valve (this was a double-diode-triode also known as HL23DD or CV 1306), Jackson/ Wavemaster tuning and reaction capacitors, Denco octal-based coils and the necessary wire, plugs, capacitors, resistors and the valve and coil bases.

A trap for the unwary was the use of a valve that required a ‘Mazda’ octal base! It was possible to order an extra valve to use as an amplifying stage. However, the single-valve model continued to take pride of place and was supplied in large numbers all over the World.

Sometime later, a new kit was made available. This was the ‘K’ model. It differed from the ‘DX’ in that a B7G based 1T4 valve was used; also the type of coil was changed to the smaller Denco DP with a B9A base. This kit was very popular, too, and used HT and LT batteries of 1.5V and 90V respectively. This kit could also include an added amplification stage, but there

seemed little need for this as results from the single-valve model were more than adequate.

HAC also provided an aerial tuning unit kit. This consisted of a coil-former, wire, a 12-way switch and two 500pF C Dilecon capacitors, together with the chassis, plugs and sockets and full Instructions. Stranded aerial wire was available, together with an Instruction leaflet offering advice on erecting a suitable aerial.

The Proprietor unfortunately died in 1974, and his widow struggled on alone at the helm for several years. At length she advertised for an engineer, and this is where the writer became involved.

It was soon realised that it would be prudent to extend the range of kits to include transistorised models. The first of these was known as the ‘T-Twin’, and consisted of an FET followed by a medium-gain bipolar transistor. It used the Denco DP range of coils and all five of these operated well in the circuit, giving a coverage from long waves to 30MHz. This model was also available with an extra front panel on which was mounted a ‘Bandspread’ capacitor.

This kit was then followed by a ‘Triple-T’, which had an extra stage of LF amplification. All these sets were intended for headphone use, but the Triple-T would drive a loudspeaker with a suitable aerial. As the earlier valve models were still in demand and HT batteries were becoming expensive and hard to obtain, a small ‘Mains’ power pack was designed and made available as a kit.

This provided approximately 90V for HT and a choice of 1.4, 2.0 and 3.0V for LT. This was, of course, suitable for other small valved sets and a large number were sold.

Headphones of 2000Ohm and 8Ohm impedance were available, and for use

with the latter a small output transformer was supplied.

Every component was tested before despatch, and kits supplied ready-made were ‘air-tested’.

Not only did the firm supply the foregoing parts but a full back-up service was undertaken. In the first instance, queries were dealt with by correspondence. If this failed to solve the customer’s problems, the kit could be returned to HAC to trace the fault or even rebuild the set at no cost to the customer. The writer was kept very busy, and words would fall to describe the amazing things that some radio chaps did to their poor kits. In most cases a complete strip-down and rebuild was far quicker than trying to tidy up a construction that had gone horribly wrong!

Eventually, the cost of the quality components used made the price of these kits appear too high in comparison with Imports from the Far East and sadly it was no longer an economic proposition to continue.

If any owner of an HAC kit requires help, the writer will be pleased to oblige. Requests should be made via the Editor.

Published in RADIO BYGONES No. 32, Christmas 1994, and reproduced with kind permission of the publisher Wimborne Publishing Ltd. 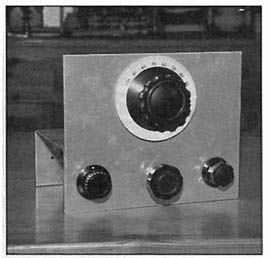